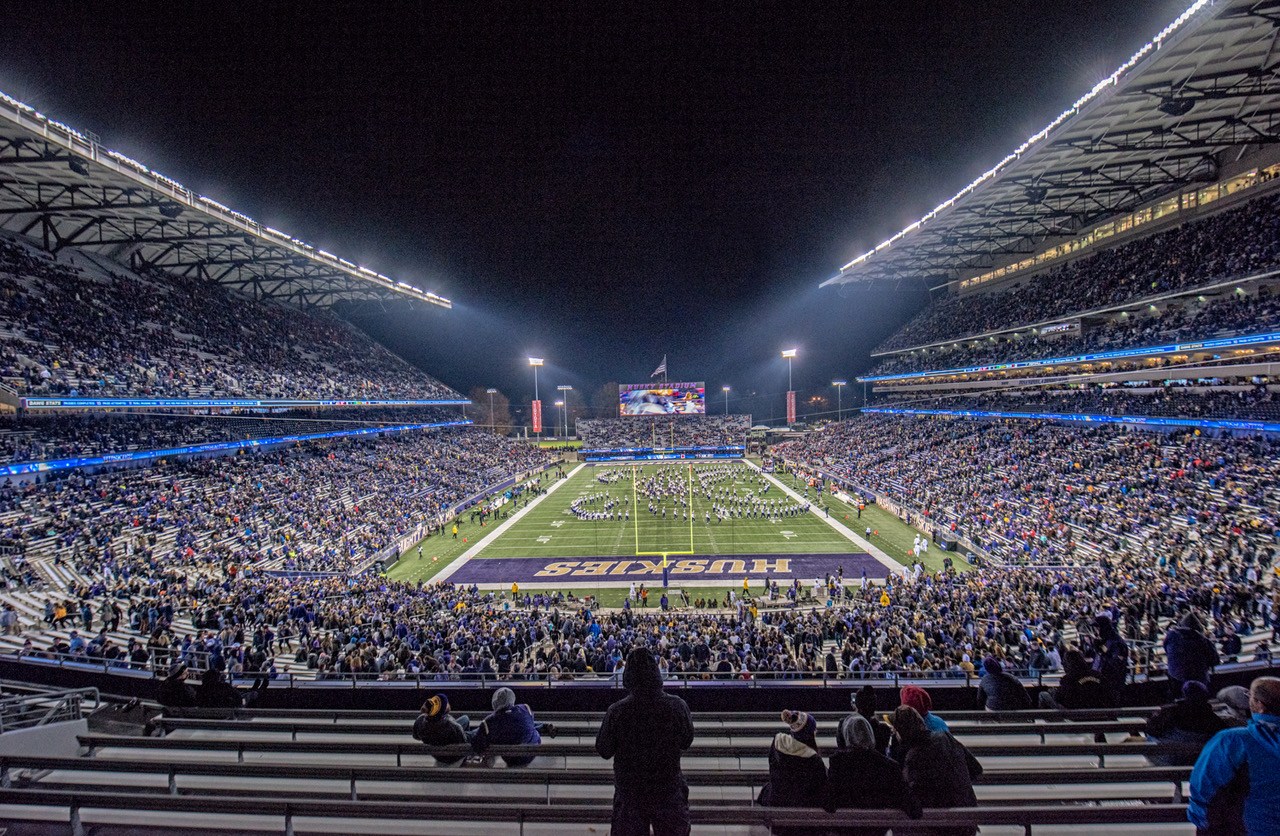 Alaska Airlines Field at Husky Stadium (colloquially known as simply Husky Stadium) is an outdoor football stadium in the northwest of United States. It is located on the campus of the University of Washington in Seattle, Washington. The stadium’s official seating capacity is at 70, 1388, after the 2011-2013 renovations. Although, prior to the 2013 renovation, its total capacity of 72,500 made it the largest stadium in the Pacific Northwest and one of the largest stadiums in college football.

The venue has also been the home of the Washington Huskies football team of the Pac-12 Conference since 1920. Other than hosting football games, the university also holds its annual commencement at the stadium in June. The precise location of Husky Stadium is at the southeastern corner of the campus, between Montlake Boulevard N.E. and Union Bay, just north of the Montlake Cut.

The original Husky Stadium was built 99 years ago in 1920 by Puget Sound Bridge and Dredging Company. The initial seating capacity was at 30,000. It replaced Denny Field that was located at the north end of campus. Husky Stadium’s first game was held on November 27, 1920, a 28–7 loss to Dartmouth. In the summer of 1923 (July 27), the stadium was the site of President Warren Harding’s final public address less than a week before his unexpected death in San Francisco.

Additional 10,000 seats were installed around the rim in 1936 to expand the capacity of the lower bowl and a few thousand more in 1968. Another 15,000 seats to the south side were installed as the first of the stadium’s iconic covered grandstands was constructed in 1950. In 1987, 13,000 seats were added along with the construction of the north grandstand. Similar to the south stand, this structure included a cantilevered steel roof that covers a portion of the lower seats. The project made headlines on February 25, 1987, when the grandstand collapsed during construction. The misfortune was a result of miscommunication between the workers and the contractor, which lead to premature removal during the intended replacement of several support cables. Thankfully there were no casualties. However, property damage ranged from $500,000 to $1 million and resulted in setbacks.

Husky Stadium was the primary venue for the 1990 Goodwill Games, where the crowd saw an address by former President Ronald Reagan and Arnold Schwarzenegger. Moody Blues & Gorky Park also put on a show during the games. The stadium was honored to have hosted both the opening and closing ceremonies, as well as the track & field competition.

Husky Stadium was the temporary home of the Seattle Seahawks for five games in 1994. That year, the Kingdome was temporarily closed for repairs to its damaged roof however, it was demolished a couple of years later in March 2000. Thereafter, the Seahawks played at Husky Stadium for the 2000 and 2001 seasons before moving into Seahawks Stadium (now known as CenturyLink Field) in 2002.

The playing surface at Husky Stadium was originally dirt but replaced with natural grass in 1938. In 1968, Washington became one of the first major college teams to play on AstroTurf at home. The AstroTurf field was replaced in 1972, 1977, 1987, and 1995. FieldTurf was installed in 2000 at a cost of $1,074,958 and became the first of its kind in NFL. The new turf features enhanced drainage and reduced abrasion. The enhancements were made possible through the use of synthetic fibers that are tufted into an infill of sand and rubber. This project was funded by Seattle Seahawks owner Paul Allen, who used Husky Stadium as a temporary home venue while waiting for the completion of CenturyLink Field. In fact, the surface was so popular with the players that the Seahawks installed their own FieldTurf surface at their new stadium. The FieldTurf at Husky Stadium was replaced with a newer one in 2009 at a cost of $350,000. In addition to the new playing surface, the Seahawks made multiple improvements to Husky stadium in preparation for its tenure as an NFL venue for two seasons.

On September 3, 2015, Alaska Airlines purchased naming rights to the field, changing the official name to “Alaska Airlines Field at Husky Stadium”. According to the agreement, the university will receive $41 million over 10 years. It became the largest of its kind in college athletics.

Husky Stadium had developed numerous structural problems over the years. This was a result of standing for 90 years in Seattle’s moist weather, particularly in the lower bowl. In November 2011, Husky Stadium began a $261 million renovation and was the largest single capital project in the history of the University of Washington. The Apple Cup in 2011 was moved to CenturyLink to advance the start of the project by several weeks. Also, home games were played at CenturyLink Field during the 2012 season during renovations.

Washington christened its $280 million renovations on the night of August 30, 2013, when the Huskies face No. 19 Boise State. The new stadium is the first and primary income source of a completely remodeled athletic district in Washington state. The new athletic district includes a new $19 million Husky Ballpark, a new track, and field stadium, and a renovated soccer stadium. Additionally, $50 million basketball operations, and practice facility and recently completed projects such as the Husky Legends Center, the Conibear Shellhouse and Alaska Airlines Arena renovations, and the construction of the Dempsey Indoor facility, were all part of the new district. This major remodel of the athletic village coincided with construction for an underground station for a northern extension of the Link Light Rail system and a replacement of the Evergreen Point Floating Bridge.

Other than that, the renovation project incorporated a new grand concourse, press box, video, and audio system, and football offices, including new and improved amenities, concession stands, and bathrooms. The track that enclosed the playing field was removed and the field itself was lowered by four feet to make room for additional seating closer to the sidelines. The student section was relocated from the north sideline to the west end zone. Additionally, the temporary bleachers in the east end zone were replaced with a permanent structure featuring field-level suites. This addition reduced the seating capacity from 72,500 to 70,138. Despite that, the renovated stadium is expected to be as loud as its predecessor. Additionally, new parking garages were constructed and facilities throughout the athletic village were renovated.

Ticket Policies:
Find out more about our ticket guarantee and other ticket policies.